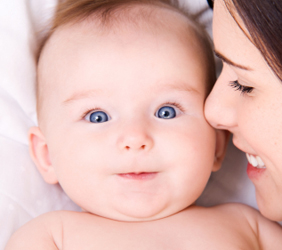 One of the most important concerns of new parents is the safety and quality of what they feed their baby. Your baby’s body expects to receive breastmilk and a mother’s milk is uniquely suited to the needs and stores of a newborn and growing infant. Mother’s milk protects babies from diseases and conditions to which they are vulnerable during their early years of life. No infant formula can duplicate the components in human milk no matter what it says on the label. Baby’s diet is crucial not only to his health as an infant but also to health outcomes throughout the child’s lifetime. Infant formula is not equivalent to human milk and feeding decisions are not like making a choice between Coke or Pepsi. Learning as much as you can about food for infants is part of the process of becoming parents.

Infant formula is a static fluid that does not change composition to meet the needs of a baby at different ages as does breast milk. Standard formulas are made from modified cow’s milk or soy and are required to contain 29 ingredients specified by the Food and Drug Administration. There are a number of concerns about the sources of some of the formula ingredients including the issue that some of what is in infant formula comes from genetically modified organisms or GMOs. Genetic modification may have been involved in ingredients such as corn syrup, corn and soybean oils, soy lecithin, and soy protein. GMO ingredients can alter the nutritional value of baby foods, increase exposure to toxins, elevate the risk of developing allergies, and pose the risk of increasing resistance to antibiotics.

• The process of genetic engineering alters the genetic structure of the food which could increase food sensitivity and food allergies later in life. Unlike breastmilk which varies with the diet of the mother and stage of infancy, the composition of formula is always the same. Food sensitivities can increase with exposure, with repeated feedings of the same formula further increasing the risk of allergies.

• Genetic engineering also has the potential to transfer allergies from one food source to another. Years ago, a nut gene was inserted into soybeans which produced soy that caused allergic reactions in people who were allergic to nuts. Modifying the genetic structure of a food could also introduce new, unpredictable allergens from non-food genes inserted through the process of genetic engineering.

• Genetic engineering has the potential to increase and/or introduce new food toxins.

• Genetic engineering could alter or decrease a food’s nutritional value or substantially increase certain components that could be detrimental to health.

The FDA does not require formula companies to label their products as containing GMO ingredients. These organisms are contained in formula and other infant foods without the knowledge of the consumer. You cannot tell from the label whether or not infant formula contains genetically modified organisms. Almost all infant formulas sold in the United States contain GMOs. However, since organic products cannot contain GMOs, some parents have turned to organic formulas to avoid giving their baby genetically modified food. There are several brands of organic infant formula on the market that do not contain GMOs. However, most of these contain a fatty acid blend of DHA and ARA that violate the organic standards because the oils were extracted from microalage and soil fungus through the use of hexane. There is only one formula marketed in the US that does not contain GMOs and does not use hexane extracted fatty acids in its fat blend, Baby’s Only from Nature’s One. This formula is labeled for use by babies 1 to 3 years of age because the manufacturer prefers that parents not use the product when breastmilk is available. Its composition meets the FDA nutrient requirements but should be used in babies younger than one year of age only after you have consulted your baby’s physician.

What’s a mother to do? Think very hard about how you will feed your baby. Many mothers wish to breastfeed but something in their life is holding them back (early return to work, unsupportive family, embarrassment, fear of pain, concern over lifestyle changes, etc). Before you abandon the idea of breastfeeding, talk with a breastfeeding expert. There are many “tricks of the trade” and mechanisms to address your concerns. Formula may appear as an easy answer but it puts your baby at a disadvantage. Breastfeeding’s health promotion and disease prevention lasts a lifetime.

To locate a mother-to-mother support group
La Leche League
Breastfeeding Helpline from the Office on Women’s Health
Or call: 1-800-994-9662