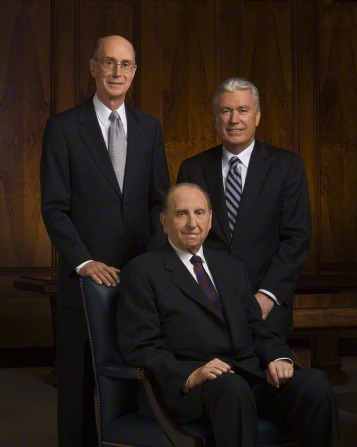 “And God said, Behold, I have given you every herb bearing seed, which is upon the face of all the earth, and every tree, in the which is the fruit of a tree yielding seed; to you it shall be for meat.  And God saw every thing that he had made, and behold, it was very good.”

“And it pleaseth God that he hath given all these things unto man, for unto this end were they made to be used, with judgment, not to excess, neither by extortion.”

We are writing to express our alarm concerning the genetic engineering of the American food supply. An estimated 85 percent of all food consumed in the United States now contains genetically modified organisms (GMOs) and most Latter Day Saints are unaware they are eating it.

In all our time on earth, humans have had the ability to move genes between unrelated species only since 1973.  Nature is set up to encourage genetic diversity and change combinations of genes.  But what the genetic engineers are doing is radically restructuring the makeup of genes and DNA. This is something unprecedented. Nobel laureate and biology professor at Harvard, the late George Wald stated: “Genetic engineering is the biggest break in nature that has occurred in human history.”

A Little Knowledge is a Dangerous Thing

Genetic engineers are permanently changing the genetic code of organisms, by breaking down the natural protective barriers that exist to prevent transfer of genes between unrelated species. By employing highly imprecise laboratory techniques, sections of DNA molecules, or genes, are removed from an organism outside the genus of the receiving organism; then forcibly – and arbitrarily – added into an organism for which the new genes are foreign.

The range of selection for these foreign genes, or transgenes, is limited only by the diversity of life forms on earth. A genetic engineer can transfer butterfly genes into an oak tree embryo, or into a human embryo, and those genes will be carried by every generation that follows.

Scientists are playing God with the laws of nature – rewriting the genetic code of species – without  fully comprehending the consequences of their actions.  Before genetically engineered organisms were released into the food supply two decades ago, the risks of growing and eating them had not been fully assessed.  Since then, compelling evidence has mounted to show that genetically engineered crops and foods are not safe – or necessary to feed the world.  [See GMO Myths and Truths, published by Earth Open Source, enclosed]

The U.S. Food Drug and Cosmetic Act (FD&C), enacted before the invention of GMO’s,  was enacted to protect consumers. It requires manufacturers to inform us about what is in the products we are buying and feeding to our children. It requires ingredient listing, as well as disclosing on the label how a product was manufactured; for example, whether fresh or made from concentrate; or irradiated.

The Biotechnology Food Labeling and Uniformity Act, recently introduced in the Senate, amends the Food, Drug, and Cosmetic Act to require labeling of food that contains GMO’s.  In 2012, the American Medical Association recommended mandatory pre-market safety of genetically engineered food, and in 2013, Senator Dianne Feinstein of California, called on President Obama to “re-evaluate the Food and Drug Administration’s outdated policy that  genetically engineered food does not need to disclose this fact on required labels.” [Please see Senator Feinstein’s letter to President Obama, enclosed].  This legislation is intended to close the loophole created when the Food and Drug Administration was politically motivated to determine that there was no difference between genetically engineered food and conventional food.

“Traditional edible plants and animals have evolved alongside humans over thousands of years to provide the people who eat them with essential nourishment. In exchange for this, we have an obligation to those plants and animals to keep caring for them responsibly.”  – Steve Ells, Founder, Co-CEO, and Chairman of Chipotle Mexican Grill

Man has been called by God to serve as a steward of the earth’s natural resources.  We cannot consider the invention of GMO’s (genetically engineered organisms) and their release into the environment as anything other than a threat to the integrity of Nature; and life as a whole. The laws of Nature are God’s will. All life, not just human life, is sacred, with an intrinsic value designated by the Creator. How can we suppose to re-design Creation by playing with the genetic code of life?

It is unethical to allow patented life forms to overtake the mainstream American diet without public knowledge or debate.  It is a perversion of God’s eternal laws to permanently alter the genetic code of the world’s major food crops, trees, and other species. [Please see The Unintended Effects of Genetic Engineering, published by The Nature Institute, enclosed]

The use of science for amassing wealth and power – while obscuring the truth regarding the widespread use of genetically engineered organisms in animal and human food, its risks, and its impact upon the environment – is morally reprehensible. Public relations campaigns, funded by the biotech industry, targeting elementary school through college curricula, are especially disturbing.

We appeal to your leadership and unfailing devotion to truth, and beseech you to call upon divine guidance regarding this matter.  Awaiting your reply.